Friend of the Court from Texas: Ken Paxton's bid to join the fight over CFPB leadership temporarily rebuffed 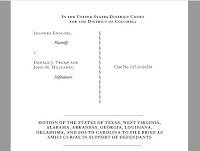 Scott A. Keller, Solicitor General at the Texas Attorney General's Office (Ken Paxton), filed appearance on behalf of the STATE OF TEXAS Nov. 28, 2017 and motion for leave to file proposed amicus curiae brief attached as an exhibit, following an amicus brief filed by Democratic lawmakers earlier. Court denied motion as moot today (Nov 29, 2017) without prejudice to refiling as to merits of a preliminary injunction (as opposed to TRO) if such a motion for injunctive relief is filed. (Judge Kelly declined to deem the ill-fated TRO a bid for a preliminary injunction, which, unlike a TRO denial, would have been appealable). A number of attorney generals from other states joined the amicus motion and brief from Texas. Attorney General Ken Paxton is on the brief, with Keller as attorney of record.

Next after the TRO Denial: A proposed joint briefing schedule is to be submitted by Dec 1, 2017.


MINUTE ORDER: For reasons stated on the record at the hearing on November 28, 2017, Plaintiff's 12 Motion to treat her emergency Motion for a Temporary Restraining Order as a Motion for a Preliminary Injunction is DENIED. To the extent that the Motion requests that the Court enter a briefing schedule on the merits, the Motion is DENIED without prejudice. The parties shall meet and confer, and submit, by December 1, 2017, a joint proposed schedule for briefing the merits and/or for briefing a preliminary injunction, should one be filed by Plaintiff by then. If the parties cannot agree on a joint proposed schedule, they shall submit separate proposed schedules. Signed by Judge Timothy J. Kelly on 11/29/2017. (lctjk1) (Entered: 11/29/2017)

The docket information reveals nothing about the substance of any ruling at or after the conclusion of the TRO hearing. A leading law firm blog covering the CFPB has additional information about what was said here and here because one of their attorneys was in attendance.

Motion of the States of Texas, West Virginia, Alabama, Arkansas,
Georgia, Louisiana, Oklahoma, and South Carolina To File Brief as
Amici Curiae in Support of Defendants:

1. District courts have “inherent authority” to grant participation by an
amicus curiae. Youming Jin v. Ministry of State Sec., 557 F. Supp. 2d 131, 136
(D.D.C. 2008). That authority is derived from Federal Rule of Appellate Procedure
29. Id. In determining whether to grant leave to participate as an amicus,
this Court has “broad discretion,” Nat’l Ass’n of Home Builders v. U.S.
Army Corps of Eng’rs, 519 F. Supp. 2d 89, 93 (D.D.C. 2007), and amicus status
is generally allowed when “the information offered is timely and useful.” Ellsworth
Assocs. v. United States, 917 F. Supp. 841, 846 (D.D.C. 1996).
Under Federal Rule of Appellate Procedure 29(a), a movant must (1) explain
its interest, (2) the reason why an amicus brief is desirable, and (3) why
the matters asserted are relevant to the case. As set forth below, amici will
provide value to this case by bringing relevant matters to the Court’s attention
that are not already discussed by the parties.

Those interests lie at the heart of this case: the Consumer Financial Protection
Bureau wields sweeping power over American life. Its actions touch
the affairs of millions of Americans. As a panel of the D.C. Circuit recently
observed, “the Director of the CFPB possesses more unilateral authority—
that is, authority to take action on one’s own, subject to no check—than any
single commissioner or board member in any other independent agency in the
U.S. Government.” PHH Corp. v. Consumer Fin. Prot. Bureau, 839 F.3d 1, 6-7
(D.C. Cir. 2016), reh’g en banc granted, order vacated (Feb. 16, 2017).

Any federal official who wields that level of power should be appointed by
the President—not by Congress, and certainly not by an unaccountable federal
bureaucrat. Plaintiff’s contrary argument that the Dodd-Frank Act of
2010 supplants the President’s choice raises serious constitutional concerns
and undermines the Constitution’s separation of powers.

Amici thus seek leave to file an amicus brief to present these issues in a
way that is helpful to the Court.

For the foregoing reasons, amici urge the Court to grant their motion to
file a brief as amici curiae in support of defendants.

Here is the status of the docket as of this morning:


Caution: Live hotlinks are to docs behind the PACER paywall and will result in charges if logged into PACER.