Motion for Continuance: Reset of Trial Date, Motion for Summary Judgment Hearing or Submission; and request for postponement of other court hearings

A continuance is the legal term used to refer to a court (judge) not going forward with a hearing or trial on the day it was set to commence per prior notice and notation on the docket (the court's agenda ketp by the clerk). This may happen for a variety of reasons. It may be the judge's unilateral decision based on scheduling considerations involving other matters, or it may be requested by either party or both parties for reasons of their own.

In debt cases, amount of time to try a case is normally not a major issue because these types of trials are, with rare exceptions, very quick and jury trials are virtually unheard of. Many such cases are disposed of within minutes, especially when there are not live witnesses, and a business records affidavit with attachments is used instead. Some judges even give them priority on trial day if they can be taken care of in a matter of minutes.

A closely related terms is "reset". A continuance amounts to reset if a new date for the hearing or the trial is fixed at the same time the continuance is granted. The new date will be noted on the docket, and a notice will be mailed to the parties and/or their attorneys, if any, by the clerk.

Nonlegal terms that refer to the same type of action in other contexts are postponement and rescheduling.

THE RULE GOVERNING CONTINUANCES: More than one

There are actually several rules in the Texas Rules of Civil Procedure that deal with continuances. It has been proposed that the rules be reorganized and simplified. Although the Supreme Court revised serveral rules in 2013, and added new ones, a comprehensive make-over has yet to happen.


The rule does not completely reflect what typically happens in the courtroom. First, many continuance are done by the court on its own initiative, or upon appearance of at least one party or attorney, regardless of whether a motion for continuance is on file. Judges don't have to justify a decision to reset a case, as long as the right to a trial is not thwarted altogether.

There may be a variety of reasons for judges continuing cases, and it is particularly common in courts with a heavy caseload, such a county courts at law in large counties that handle the majority of debt collection cases.

Second, the rule does not state that an agreed continuance is automatic. The judge still retains discretion to grant the continuance or deny it and go forward with the hearing or trial. As a matter of common courtroom practice, however, the judge will  almost always grant an agreed motion for continuance as long as trial has not already been reset several times before in the same case.

County and district court judges may be more concerned with the length of time cases linger on the docket without a final decision because the Supreme Court has adopted guidelines for timely disposition, statistics are kept, and judges may be evaluated on their performance, based on such metrics, come the next election. If many very old cases remain pending, it makes them look bad. The disposition guidelines do not apply in justice court, and statistics for individual courts are typically much harder to come by.

Third, the summary judgment rule has its own provision for motions for continuance, but it closely tracks the rule that applies to trial continuance based on an alleged need of the party for additional discovery or deposition testimony.

Finally, the set of rules that expressly address the topic of continuance do not cover another important ground for a trial reset: insufficient notice, or none at all.

In order to enforce minimum required notice periods, the aggrieved party must bring its complaint to the trial court's attention. If an appeal may ensue, it would also be important to obtain a ruling on the objection.
The complaint about insufficient notice of a hearing or trial setting may be done by written objection filed with the clerk or through a motion for continuance.

There are some differences between the two forms: A motion for continuance will require a certificate of conference with the opposing counsel who set the hearing and will have to be captioned opposed or unopposed. Second, since it is a motion, it would have to be accompanied by a proposed order, and would arguably be subject to timeliness requirements applicable to motions generally. At least, the motion should be filed as promptly as possible, once the need for it becomes apparent. Third, a motion for continuance would be expected to be sworn like motions for continuance based on other grounds, at least as long as the lack of notice or insufficient notice is not apparent elsewhere on the record. To be on the safe side for purposes of appeal, the motion should be sworn ("verified") or accompanied by an affidavit setting forth the relevant facts regarding lack of (or belated) notice.

The minimum required notice depends on the nature of the hearing, and  -- in the case of trial settings -- whether it is the first trial setting, or a reset.

Summary judgment hearings (or hearings by submission) require a minimum of 21 days prior notice to the other party (called the non-movant); other types of motions can be set on much shorter notice: as much as a few days under the TRCP, but the local rules in a particular county, court system/division, or individual court, may require more.

There is plenty of case law from the courts of appeals, which typically involves denials of motions for continuance, and whether such a ruling by a trial court judge was error.

Generally, such a denial is no abuse of discretion, and not grounds for reversal of the judgment, if the motion was defective (such as  not having been sworn, or not setting forth grounds); or if there was no good cause for the continuance, i.e. need for it supported by sworn facts that establish that the substantive requirements for a continuance have been satisfied.

A typical basis, whether pretextual or well-founded, for not wanting to go forward with a trial is the claim that further discovery is needed, or that a witness is not available to testify, or wasn't available for deposition. Another common reason is a scheduling conflict of one of the attorneys, particularly a conflicting trial setting in another court.

NEED FOR ADDITIONAL EVIDENCE OR TESTIMONY AS GROUNDS FOR CONTINUANCE

Rule 252, oddly titled "APPLICATION FOR CONTINUANCE" rather than Motion for Continuance, sets rules for a continuance based on the unavailability of testimony. This ground must be supported an affidavit that shows that the party seeking the continuance for that reason has exercised due diligence in seeking to obtain such testimony, and that the testimony is material.


OTHER BASIS FOR CONTINUANCE - ABSENCE OF PARTY'S ATTORNEY

Rule 253 states that the absence of a party's lawyer does not constitute good cause for continuance or postponement of trial, but the judge nevertheless has some discretion under such circumstances.
Rule 254 addresses the situation of an attorney serving as a legislator. In most cases the grant of a continuance requested by such attorney-legislator is mandatory if the legislature is in session.

As a general rule, the grant or denial of a motion for continuance is a matter on which the trial court exercises its discretion. Some judges let it be known that they will grant the first continuance as a matter of course, and that any further ones require good reason or extraordinary circumstances.

MANDAMUS PETITION FILED TO GET COURT OF APPEALS TO OVERRULE TRIAL JUDGE ON DENIAL OF MOTION FOR CONTINUANCE, BUT UNSUCCESSFUL 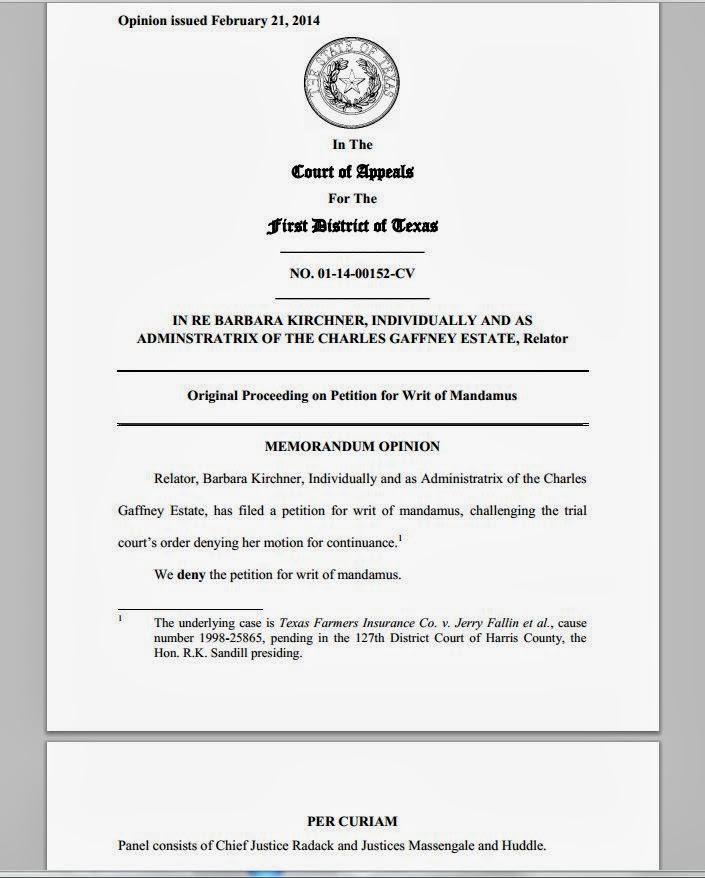