Rich Reister vs. Wretched Reynolds – Disparate treatment of lawyers reaching out to people in need of legal services too quickly under Texas anti-Barratry Statute is ... rather troubling

CHASING CLIENTS FOR A LIVING: THE CRIMINAL DIMENSION OF CONSUMER LAW

Reister versus Reynolds is not an actual case. It’s two cases. Reister is shorthand for Janet L. Shearer v Rich Reister, and – after a trip to the court of appeals - Reister v Dallas County District Attorney, while Reynolds stands for State of Texas vs. Ronald Eugene Reynolds, and Reynolds v State of Texas, on appeal in iterations, for a total of five convictions, now affirmed.

Richard Reister solicited clients in violation of the Texas barratry statute and got the law declared unconstitutional so he could keep doing it; Ronald Reynolds is heading for jail for one year unless the Texas Court of Criminal Appeals reverses. 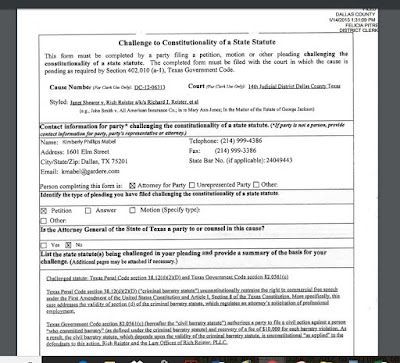 This blawg normally focuses on debt collection litigation, but I will digress and address an issue that falls under the rubric of “the law that governs lawyers” and is, as will become clear, related. 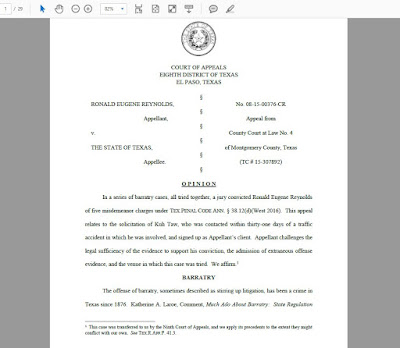 The fact that the criminal defendant is also a Democratic member of the Texas House of Representatives adds a special wrinkle, and has no doubt caused this barratry case to receive more media attention than it would otherwise have attracted at the time it was prosecuted and tried, but this is not the key issue.

At least not from a legal and public policy perspective.

The key issue, as I see it, is that the charge and conviction was not for “ambulance chasing” per se (though the background facts in the case are not complimentary and also illustrate other misconduct); instead, the penal code violation that resulted in Reynold’s conviction was the violation of the statutory blackout period for soliciting would-be clients; -- in Reynold’s case, accident victims.

In Texas, contacting victims of accidents within 31 days of the accident to solicit them as clients is a crime (misdemeanor) while doing so after 31 days is not (as long as it does not involve methods of solicitation that are otherwise prohibited).


While this is a matter of state law, and could be changed if the Texas Legislature were to reconsider the wisdom of it, the critical point in time when illegal becomes legal is – essentially – arbitrary.

This arbitrary black-out period also applied to solicitation of people finding themselves as defendants in civil court, the reference point there being the date the lawsuit was filed against them, rather than the date of the accident that gave rise to the personal injury claim against the at-fault driver. Tex. Penal Code Section 38.12(d)(2)(C) [current version, renumbered].


Reynolds is heading to county jail for one year for multiple violations of the 31-day blackout period, but another lawyer, up in Dallas, was not only not indicted (not to mention convicted), but sued the District Attorney (by third-party petition in a civil barratry case, see motion below) and got the DA enjoined from enforcing the barratry statute against him as unconstitutional. 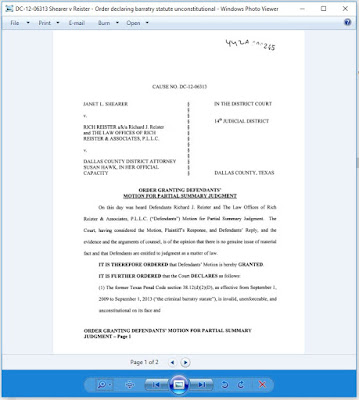 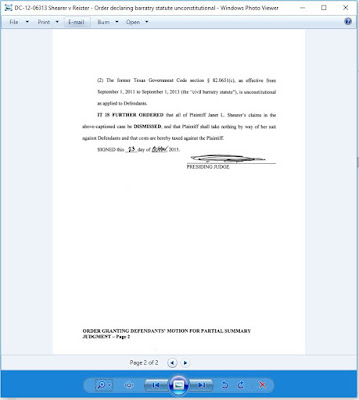 To seek an economic benefit is not an inherent evil. Indeed, it is a fundamental premise of a free market system. Nor is the pursuit of self-interest necessarily at the expense of another. Mutual bargains and exchanges are also a fundamental tenet of our economic and social system.

In the case of accident victims, there was a high probability that the solicited clients would obtain an economic benefit, with no out-of-pocket expense to them (based on a contingent fee contract).

In the case of Reister, who solicited clients to defend them against debt collection suits, the client would have to pay Reister, with the prospect of having their debt suits dismissed thanks to the benefits of legal representation being iffy, at best. Reister certainly could not guarantee a favorable outcome in the nature of judgment-avoidance (dismissal of debt suit or take-nothing judgment), and the solicited clients would be responsible for the payment of whatever fee Reister charged them for the defense work. In other words, Reister’s clients were not necessarily net beneficiaries of his services.

In the case of auto-PI cases, by contrasts, there would be no point for the lawyer to solicit the client and pursue the claim if both the client and the lawyer would not jointly benefit from the recovery of damages. The point here is that in a traditional contingency-fee contract on a cause of action for monetary relief such as a PI case or claim for other types of damages, the economic interests of attorney and client are more closely aligned than they are in the judgment-avoidance or judgment-settlement context (although the latter may also contain a contingent feature requiring the client to pay additional fees, based on the savings achieved for the client relative to the amount they were sued for).

Yet Reister, a confessed "habitual violator" (see his affidavit below) was accommodated with a judicial declaration that would allow him to continue to solicit debtors and make money off them (regardless of case outcome) while Reynolds is heading to jail for procuring monetary recoveries for people he permitted to be solicited (to become his clients) within the 31-day blackout period, and for whom he obtained recoveries.

Who is the victim here, if there is one? Who was wronged?

I would submit that the question should at least be seriously pondered.

As should the wisdom of the law under which Reynolds was convicted.

Reister's Plea against enforcement of the Texas barratry statute: 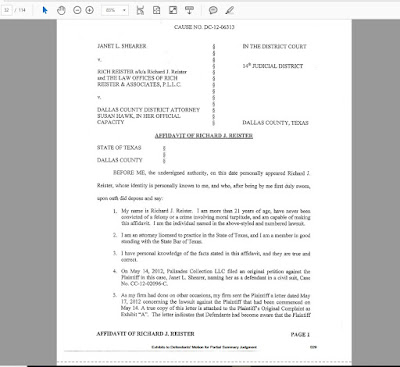 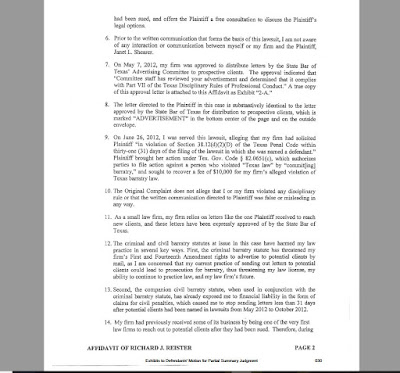 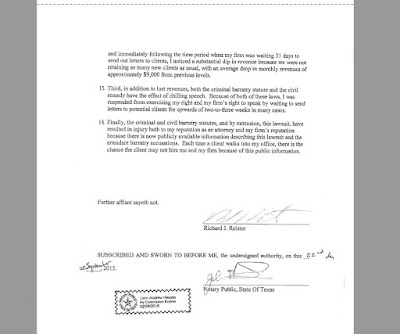 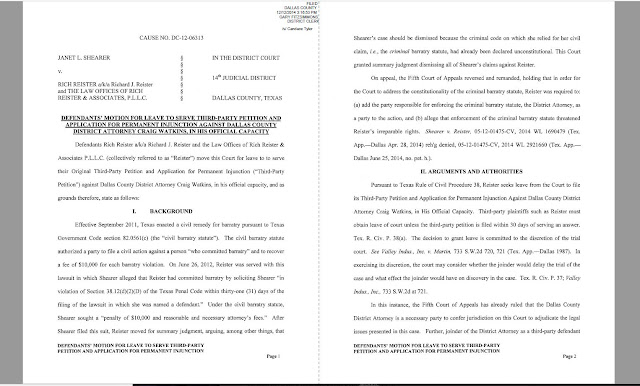 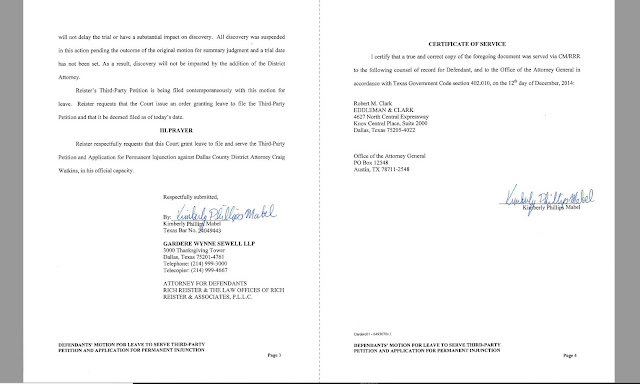 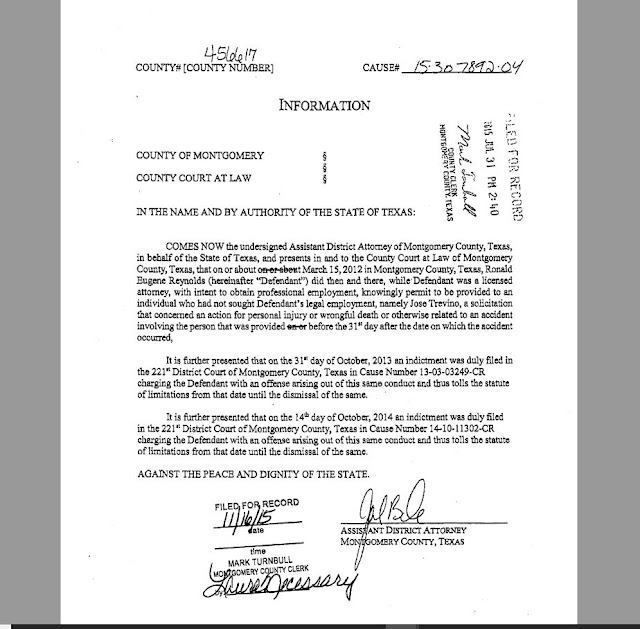 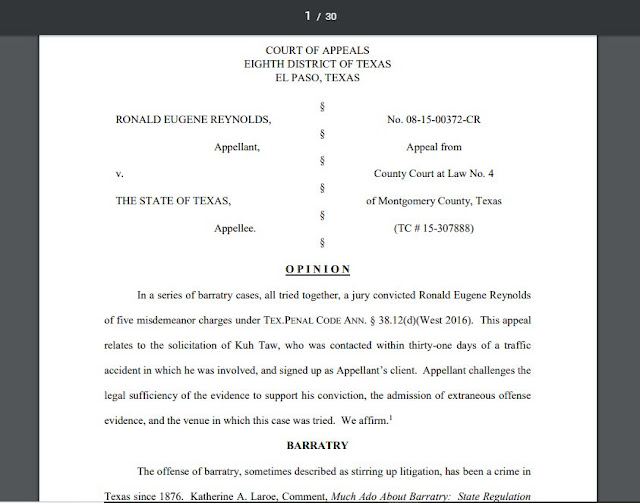 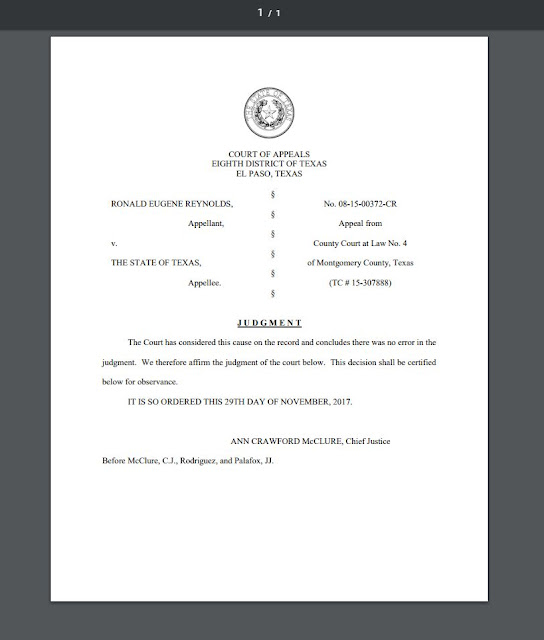 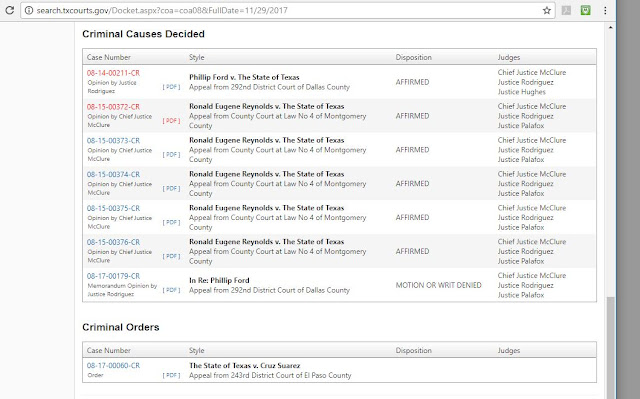