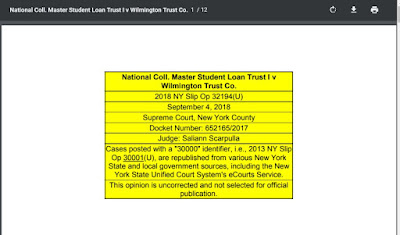 The following facts are taken from the complaint and assumed as true for purposes of this motion to dismiss. Each of the plaintiff Trusts[1] is a Delaware statutory trust formed to acquire pools of student loans and issue notes backed by the Trusts' assets. GSS is the Administrator of the Trusts, and Wilmington is the Owner Trustee of the Trusts and is responsible for managing their affairs at the direction of the Trust Owners.[2] Plaintiff Chaitman LLP ("Chaitman") is a New York law firm retained in November 2015 by Wilmington on behalf of the Trusts (Chaitman and the Trusts are collectively referred to as "Plaintiffs").

In December of 2015, Chaitman began submitting legal invoices for legal services provided for the Trusts to Wilmington and GSS. These invoices were processed as follows: first, the Owners would Wilmington to send the bills to GSS; next, Wilmington would direct GSS to submit the bills to the Indenture Trustee for payment; finally, the Indenture Trustee would pay the bills received by GSS on the following distribution date for the Trusts. Chatman received compensation for its services through this process without any issues from December 2015 through August 2016.

In March 2016, there was a transfer of a minority of the ownership interest in the Trusts. Wilmington approved the transfer and issued Trust Certificates in the same month, listing the current — post-transfer — owners as 100% owners of the Trusts. That same month, the Trusts sued the servicer of the Trusts, Pennsylvania Higher Education Assistance Agency ("PHEAA"), in Delaware Chancery Court for certain alleged gross violations of its agreement with the Trusts. In that proceeding, PHEAA argued that the ownership transfer was invalid because it effectively vested 100% ownership in a single owner in alleged violation of the Trust Agreements.
By letter dated August 24, 2016, GSS informed Wilmington that, because of the ownership issue, it would not issue any further payments absent "further comfort" from Wilmington. On or about October 10, 2016, Chaitman informed Wilmington that it would be sending more invoices for Wilmington to process. On or about October 12, 2016, counsel for Wilmington advised Chaitman that it would not forward and process its invoices to GSS for payment until the ownership issue raised by PHEAA was resolved. As of the date of the complaint, Chaitman claimed legal fees in the amount of $314,296.99, along with an additional $1.1 million that is purportedly owed to counsel retained by Chaitman on the Trusts' behalf.

Under CPLR 302(a)(1), jurisdiction may only be exercised over an out-of-state defendant if that defendant "has purposefully transacted business within the state and there is a substantial relationship between the transaction and the claim asserted." Coast to Coast Energy, Inc., 149 AD3d at 486 (internal citation and quotation marks omitted). "Purposeful activities are those with which a defendant, through volitional acts, avails itself of the privilege of conducting activities within the forum State, thus invoking the benefits and protections of its laws." Fischbarg v Doucet, 9 NY3d 375, 380 (2007) (internal citations and quotation marks omitted).

Plaintiffs assert that CPLR 302(a)(1) jurisdiction may be exercised over Wilmington because Wilmington transacted business in New York by signing a retainer agreement with a New York law firm on behalf of the Trusts, and the legal services were performed in New York. Plaintiffs maintain that Wilmington made innumerable telephone and e-mail communications to Chaitman in New York regarding Chaitman's performance of legal services and payment for those services.
Wilmington executed the Retention Agreement in Delaware, solely in its representative capacity and at the direction of the Trusts' Owners, to represent the Trusts.[3] This action constitutes "neither the performance of any act within the state [n]or the transaction of any business here giving jurisdiction pursuant to CPLR 302." Law Research Serv., Inc. v Crook, 36 AD2d 912, 912 (1st Dept 1971)(no long-arm jurisdiction over out-of-state attorney whose only connection to the state is that he hired New York attorney to represent his client in a Texas proceeding).
This situation is markedly different from other cases finding jurisdiction based on the engagement of a New York lawyer or law firm by an out-of-state entity. Cf., e.g., Fischbarg, 9 NY3d at 380-82 (defendant purposefully retained and "established a substantial ongoing professional commitment" with New York attorney by directly and frequently communicating with attorney for months regarding the representation); Kaczorowski v Black and Adams, 293 AD2d 358, 358 (1st Dept 2002) (defendant sought out New York attorney, and once attorney was retained he was "repeatedly consulted in New York by defendant respecting the matter in which he was retained").
Moreover, no allegation in the complaint supports Plaintiffs' claim, which was asserted in the opposition memorandum, that Wilmington "made innumerable communications via telephone and email to Chairman in New York with respect to Chaitman's performance of legal services in the State of New York and concerning payment for those same services." These unspecified communications are not sufficient to confer CPLR 302(a)(1) jurisdiction. See Coast to Coast Energy, Inc.,149 AD3d at 487 ("plaintiffs vague, conclusory and unsubstantiated allegations do not suffice to establish long arm jurisdiction") (citations omitted); see also Cotia (USA) Ltd., 134 AD3D at 484; Gordon v Credno, 102 AD3d 584, 586 (1st Dept 2013).

At most, the allegations in the complaint regarding two communications between Chaitman and Wilmington show that Chaitman initiated communications with Wilmington to collect legal fees, to which Wilmington responded. Chaitman's "own New York activities . . . cannot be attributed to defendants" for purposes of establishing personal jurisdiction over an out-of-state defendant. Kennedy v Yousaf, 127 AD3d 519, 520 (1st Dept 2015); Haar v Armendaris Corp., 40 AD2d 769, 770 (1st Dept 1972), revd on dissent, 31 NY2d 1040 (1973). Accordingly, there is an insufficient basis to exert CPLR 302(a)(1) jurisdiction over Wilmington.

In support of CPLR 302(a)(3) jurisdiction, Plaintiffs argue that Defendants' failure to pay Chaitman's legal bills caused Chaitman injury in New York. At oral arguments, Plaintiffs also asserted that Defendants' refusal to certify and authorize Chaitman's payments constitutes tortious interference and breach of a ministerial duty sufficient to support jurisdiction, although these assertions are not supported by the complaint.

To the extent any of these claims could be construed to be a tort cause of action, it would be the second cause of action against GSS, under which Plaintiffs alleges that, "[b]y refusing to certify Chaitman's invoices to the Indenture Trust for payment, GSS has breached duties owed to Chaitman under the Trust Document, the Retention Agreement, and by reason of the relationship of the parties." Complaint ¶ 46. However, even applying the most liberal pleading construction to this claim, it is insufficient as a basis for personal jurisdiction.

"For the purpose of determining the applicability of CPLR 302(a)(3), the situs of the injury is the location of the original event which caused the injury, not the location where the resultant damages are subsequently felt by the plaintiff." Carte v Parkoff, 152 AD2d 615, 616 (2d Dept 1989) (citations and quotation marks omitted). If the resultant damages are "solely economic, the situs of commercial injury is where the original critical events associated with the action or dispute took place, not where any financial loss or damages occurred." CRT Invs., Ltd. v BDO Seidman, LLP, 85 AD3d 470, 471-72 (1st Dept 2011) (citations omitted); Deutsche Bank AG v Vik, 163 AD3d 414 (1st Dept 2018) ("That plaintiff felt economic injury in New York, alone, is an insufficient basis to confer jurisdiction.").

Here, the critical events — Defendants' refusal to process and certify Chaitman's invoices for legal services provided to the Trusts — all occurred outside of New York, in Delaware and California. As such, Plaintiffs cannot establish that Defendants are subject to jurisdiction in New York under CPLR 302(a)(3).[4] See CRT Invs., Ltd., 85 AD3d at 471-72; Storch v Vigneau, 162 AD2d 241, 242 (1st Dept 1990) ("an injury does not occur in New York within the meaning of CPLR § 302(a)(3) merely because a plaintiff is domiciled in New York and suffers a loss of income here) (citation omitted).

Insofar as Plaintiffs seek jurisdictional discovery in the alternative, they have not made a "`sufficient start' to warrant such discovery." Cotia (USA) Ltd., 134 AD3d at 485 (citing Peterson v Spartan Indus., 33 NY2d 463, 467 (1974); SNS Bank v Citibank, 7 AD3d 352, 353 (1st Dept 2004); see also Warck-Meister v Diana Lowenstein Fine Arts, 7 AD3d 351, 352 (1st Dept 2004) ("discovery was not warranted since plaintiff failed to advance any non-conjectural ground to believe that the disclosure sought would be productive of evidence supporting an exercise of jurisdiction over defendants").

Because I dismiss the complaint for lack of jurisdiction, I do not consider the remaining portion of Defendants' motions to dismiss.

In accordance with the foregoing, it is

ORDERED that the Clerk is directed to enter judgment accordingly.

This constitutes the decision and order of the Court.

[1] Specifically, the following entities: The National Collegiate Master Student Loan Trust I, The National Collegiate Master Student Loan Trust 2003-1, 2004-1, 2004-2, 2005-1, 2005-2, 2005-3, 2006-1, 2006-2, 2006-3, 2006-4, 2007-1, 2007-2, 2007-3, and 2007-4, collectively.
[2] Although not relevant for purposes of its motion, Wilmington resigned as Owner Trustee by letter dated June 20, 2017, and it does not appear that a replacement Owner Trustee has been appointed yet. See Hornung Reply Aff., Exs. A-C.
[3] To the extent that Plaintiffs rely on a portion of the Retention Agreement which provides that, "[i]n the event that [Wilmington] is named in its individual capacity in any borrower lawsuit, Chaitman will take steps to have [Wilmington], in its individual capacity removed," this alone does not provide an adequate basis to exercise jurisdiction over Wilmington absent any indication that such services were ever provided to Wilmington.
[4] Moreover, to the extent that the complaint may be construed to contain a claim for tortious interference with contract, plaintiffs fail to allege that defendants intentionally procured the breach "without justification" given the presently live issues surrounding the transfer of ownership. See Lama Holdings Co. v Smith Barney Inc., 88 NY2d 413, 424 (1996).