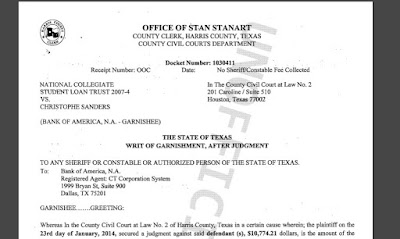 Nicole Hillman is the attorney who has been filing garnishment actions on behalf of National Collegiate Student Loan Trust in Texas. This blawg post will show what the “paperwork” in those garnishments looks like.

But first an editorial note:

Some may think it is in bad taste to call out attorneys in this line of work publicly. I have concluded that there is nothing wrong with it, and that -- much rather -- their doings should be exposed and held up to public scrutiny and reasoned debate. It is the path they have taken. Nobody arrested them and marched them down this road.

They have chosen to make a living inflicting misery on others, people struggling to make ends meet or otherwise down on their luck.

How many student borrowers would “strategically default” on their student loans if they know it will ruin their credit for years? And how is it not rational to stop paying on student loans if your credit is already ruined and you can barely meet ordinary living expenses? Would you give preference to paying on unsecured loans and risk getting evicted for nonpayment of rent or mortgage, or having the car repossessed that you need to get to work every day?

That’s where the garnishment remedy comes in. It allows creditors to relieve borrowers of money they would otherwise spend on food, shelter, and other necessities of life.

And that’s important in a state like Texas where unsecured creditor cannot tap debtor’s wages directly.

For the financially strapped student loan obligors, whether borrower or co-signer, bankruptcy is not much of a solution to their predicament, given that educational debt is generally non-dischargeable.


Educational loans are not subject to discharge unless excepting such debt from discharge would impose an undue hardship on the debtor and the debtor's dependents. 11 U.S.C. § 523(a)(8).

The ultimate irony is when the collection attorneys themselves end up indigent or in bankruptcy. Anh Regent, for example, who until recently obtained private student loan default judgments for the National Collegiate Student Loan Trusts along with other creditors, see document samples below), or when debt collectors complain about their mortgage being foreclosed following failure to make payments on the note. Like Benjamin Sanchez, a once prolific collector of charge-off the credit card debt sold to debt buyers such as PHARIA LLC and DODEKA LLC . See 14-13-00272-CV for details, if you wish to sympathize with Ben, or indulge in a bit of Schadenfreude. Also see Sanchez verbatim below. 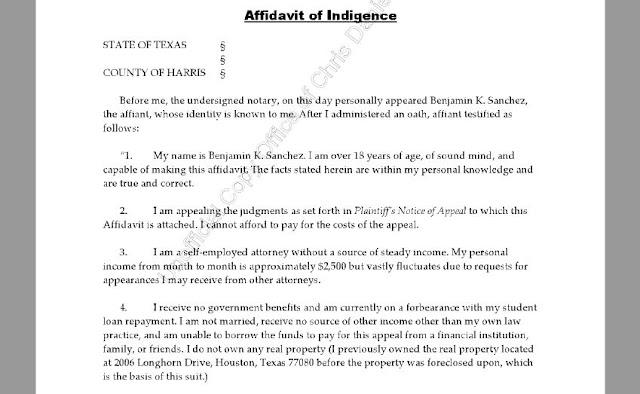 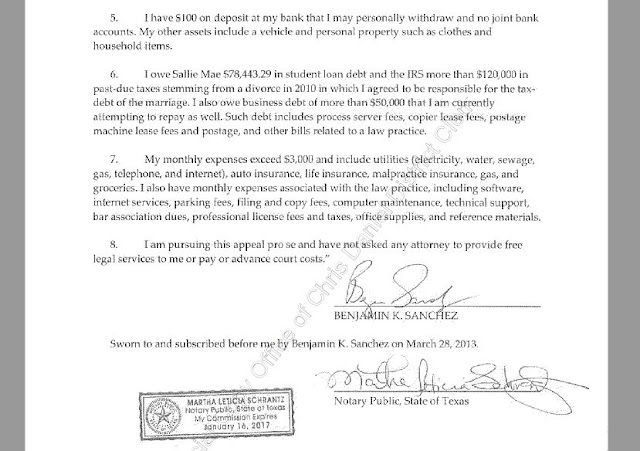 After Anh Regent went South, Nicole Hillman took on the task of collecting on the default judgments he procured against student borrowers, including hefty attorney’s fees.

The attorneys that opt to go into this line of business either oversee or are part of lawsuit mills.

They take advantage of very creditor-friendly laws and rules, and of courts that rubber-stamp default judgments and enforcement remedies. They know they are hurting people who do not have the wherewithal to defend themselves in a legal proceeding, and they know that most of them don’t have money to hire an attorney. They know that the targets of the lawsuits they file by the hundreds -- if not by the thousands -- are struggling financially, which is why they defaulted on their private student loans in the first place. Some will even say why: Because the loan servicer won’t work with them. So student loan debtors who are financially struggling work out some options for their federal loans, and stop paying on their private ones.

To be sure, some judges have check-lists or standard operating procedures in place to ascertain whether all the formal requisites for default judgments have been met, but creditors typically get default judgments anyhow. The court’s staff does some quality-control for them, like checking if the Defendant has, in fact, been served as alleged in the motion, checking if an answer is on file, and checking whether a nonmilitary affidavit has been submitted that is not already stale. Some judges make creditors’ attorneys show up in court if the motion for default judgment is found wanting. But the creditor prevails in the end. With very rare exceptions. And the courts are doing them a favor with rudimentary quality control – not to mention an exacting one -- because it makes their judgment virtually unassailable. Judgments with pegged-on attorney’s fees that augment the debt by thousands of dollars even the entire default judgment process was entirely transactional and based on only a few documents spat out from a computer system overseen by lowly paid clerical staff. The modern-day equivalent of paper shufflers, except that they use office computers and now efile, rather than just processing hard-copy paperwork (in the original sense of the term) and mail. Courts routinely approve thousands of dollars in attorney’s fees for lawsuits on which low-level non-attorney staff has spent minutes. They do so because the attorney on the case has sworn that their law firm takes cases on contingency and that $$$$ of dollars is reasonable or this case. Default judgment signed. Case closed.

Concededly, trial judges do not have much discretion to deny default judgments, no matter how unfair, because the rules themselves are stacked against the Defendants.

In Texas, a breach-of-contract plaintiff does not even have to attach the contract to the pleading, for example. In the default judgment context, the allegations in the pleading are deemed admitted, just not the damages. And the damages can be “proven up” by affidavit with a copy of the “instrument” attached. The affidavits submitted in support of default judgment are automatically acceptable if notarized because no one is present to challenge them, and the judge would not know it if the affiant is lying or making mistakes, unless the testimony is actually at odds with the attached documents. That happens fairly regularly, but to catch such error would require a more meticulous review than courts with high volume of business don’t have the time and resources for.

Especially not when the case is a run-of-the mill case that involves a comparatively small amount of money. Since the defendant didn’t get a lawyer to fight the lawsuit, he or she probably won’t hire a lawyer to appeal or otherwise complain of the default judgment, so even if the motion is not up to snuff, the likelihood of the resulting judgment for the creditor being challenged is small. The creditor’s attorney has already submitted the judgment. All the judge has to do is sign off on it. The chance of getting reversed on appeal approach nil.

And in JP courts, the amount is low by definition because those courts' jurisdiction is capped at $10,000. If there is an appeal, it won’t ever result in a published opinion reversing the lower court because the appeal will result in trial de novo in the court of record to which the appeal is taken. No JP court judgment is ever overturned on a finding that the justice of the peace committed legal error or abused his or her discretion.

For post-judgment writs of garnishment, a court order is not even needed. A mere application suffices. The writ will issue as a matter of course, and when served on the financial institution, will typically freeze all money in the account except possibly money that the bank can identify as protected by federal law.

Texas does not allow wage garnishment directly (except for child and spousal support), but it allows seizure of money deposited into a bank or a credit union accounts. So, all employed debtors who receive their pay via direct deposit are at risk of having ALL of their most recent earnings taken: All amounts remaining in the account from their last pay check as of the day the day the bank is served with the writ, and all additional amounts that arrive while the bank’s lawyer is preparing to answer the writ issued on application of the garnishor’s attorney.

In the case of National Collegiate Student Loan collection, the attorney who causes this to be done to them is Nicole Hillman. Texas Bar Card Number 24055666, licensed in Texas since 11/03/2006. 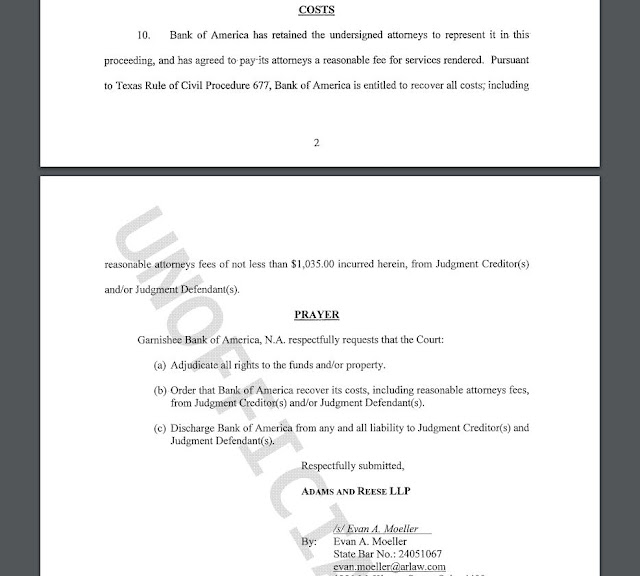 Below are more snips from documents that demonstrate what such a garnishment action looks like:

Application for WRIT OF Garnishment 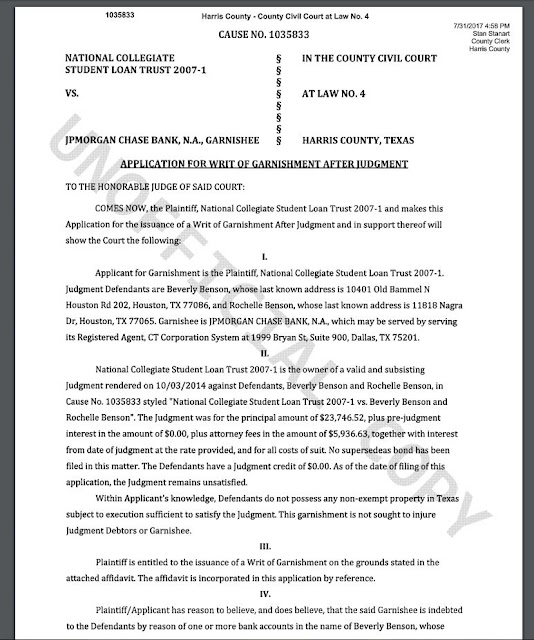 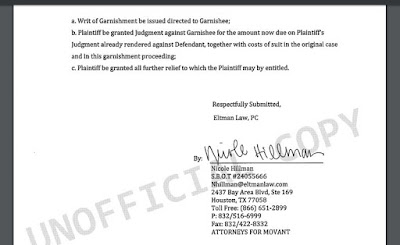 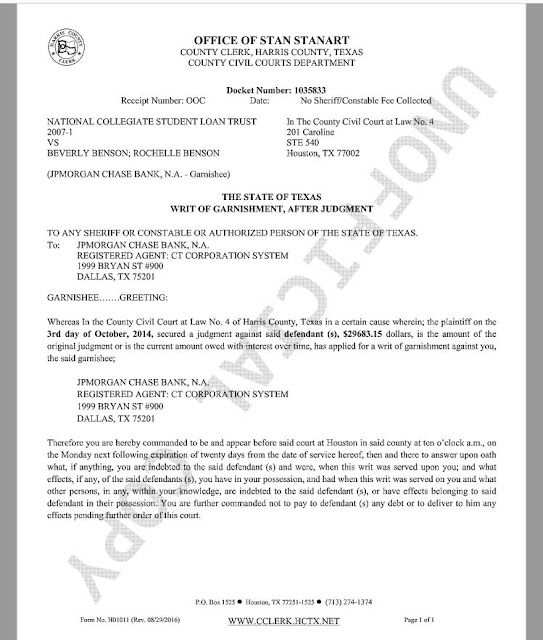 Post-judgment Wrist of Garnishment issued September 1, 2017
on Judgment in favor of National Collegiate Student Loan Trust 2007-1 in by a
Harris County Civil Court at Law 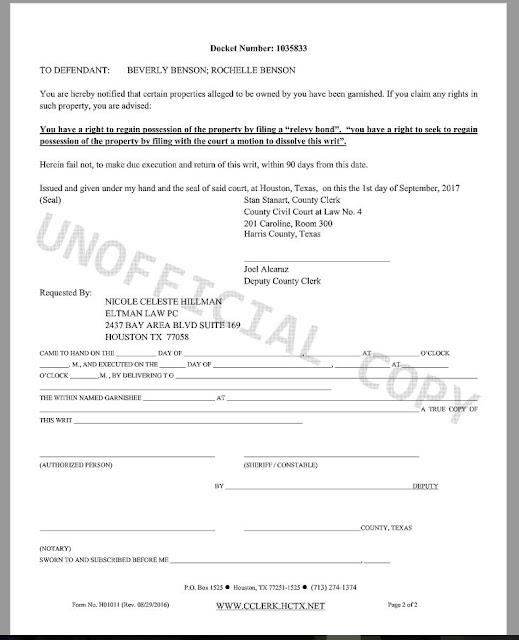 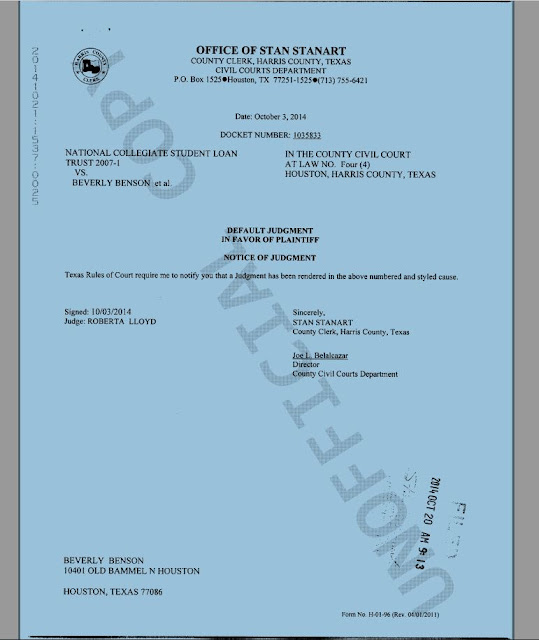 Apparently they had a bad address for the defendant Step One: Offer a moderate teaser rate of say 7.25%
(Margin over Libor) 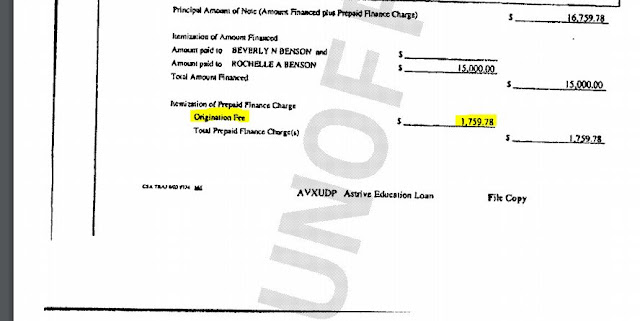 Step Three: Hope the student will be so happy getting the check, and won't notice what happened between the signing of the loan application (here Dec 12, 2006) and disbursement (Dec. 19, 2006) until its time to start re-paying after graduation.
Risk: Applicant might cancel and return the check otherwise.

Step Four: Show would-be investors in Trust 2007-1 the high margins in your pool, and make them salivate for the high yields. 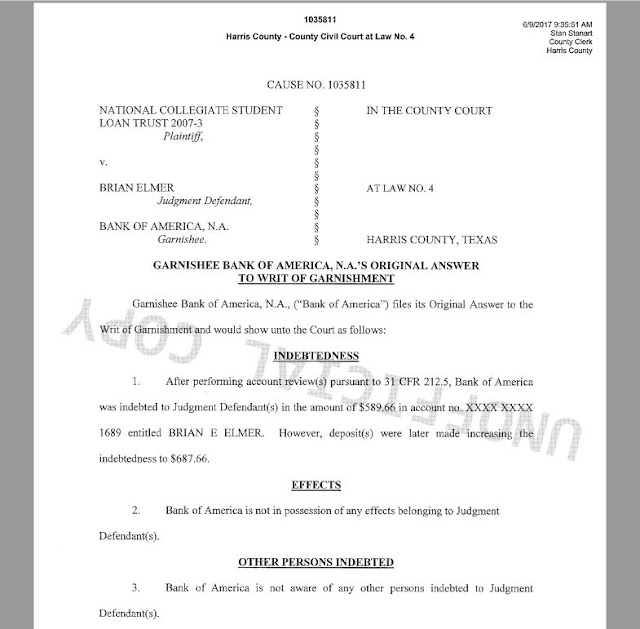 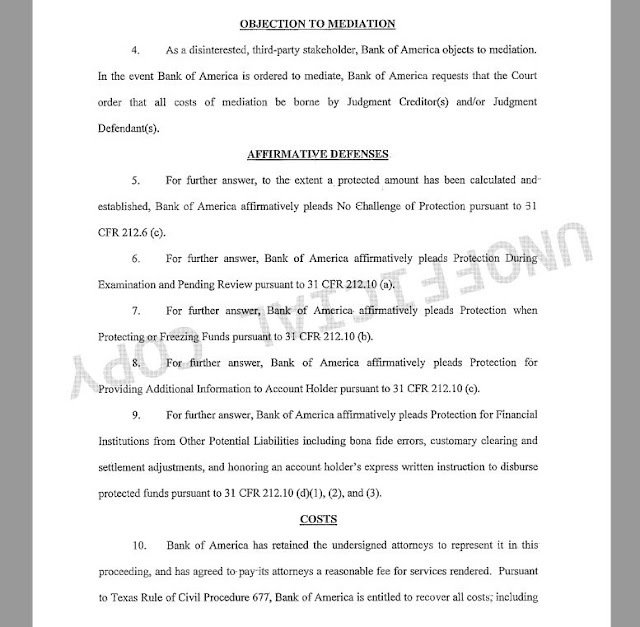 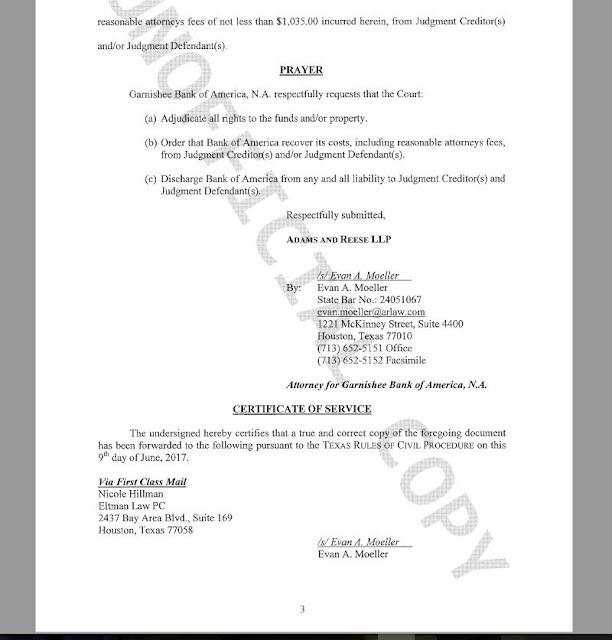 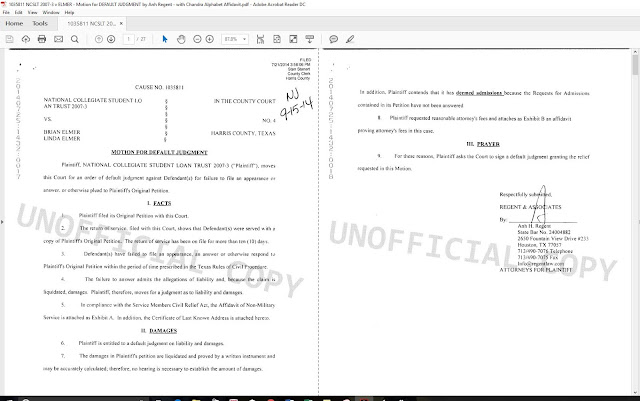 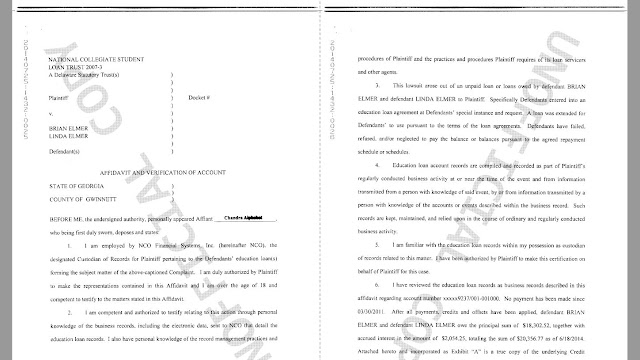 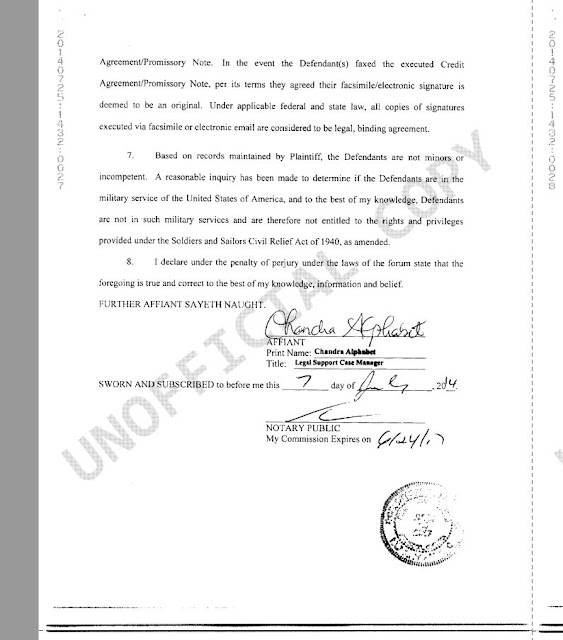